This submission for Business Card Jam was inspired by the novel Wilder Girls by Rory Power, a beautiful, raw, haunting book about the way we can't always control the desires of our bodies and the ways they change.

This game involves dice rolling and destroying the card to reflect the way your body changes. While the game instructs you to play over time, reflecting the way the girls in the book mutate one month of the year, feel free to play at any pace that's fun for you!

Hi, as said in the Jam page, I planned to include Wilder Girls in my current solo campaign. So below is my playing report

context: 1921, USA, my character is at the hospital and alternates between awake and coma phases. I decided that these coma phases wouldn't stop until I won the Onirim solo cardgame (about a labyrinth and nightmares), and I just won but he encoutered eight nightmares so he's not really sane anymore.

I have chosen to play Wilder Girls like this: my character falls (again) into a coma. The 12 sided-dice tells me that he'll stay awake 2 days before falling, and then he'll stay into coma for 7 days. So I rolled 2x7 times the dice and I got two times a 12 result. So I riped off two times the borders of the Wilder Girls card without looking at it. I got: "suckers" + "webbing & moss". So he woke up with small plant-like skin suckers on his body, and a webbed mossy hand.

Thanks for this Wilder Girls game!

that sounds so cool!! i'm glad it served you well! :'D 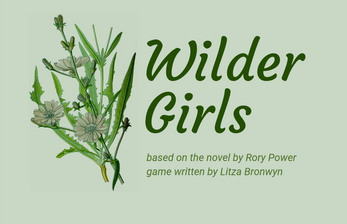 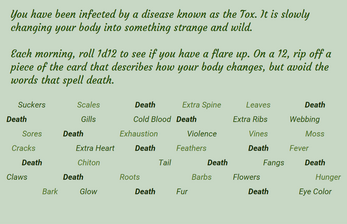